If Ray Bradbury's still mad at Michael Moore, guess how they both feel about someone threatening to burn the Qur'an. In public. On the 9th anniversary of 9-11.

It took Hitler and the Nazi Party fourteen years to get to the point where they could start burning books, having proclaimed an "Action against the Un-German Spirit" that climaxed in a literary purge or "cleansing" ("Säuberung") by fire.

It only took the United States nine. Ten, if you're counting from Bush v Gore.

Maybe the only difference between the two shameful acts is that every Muslim in the world will be watching this time. Bret Baier is already on it - with all to follow, all frantically keeping up with the Jones - ensuring the wrong 15 minutes of fame for the next 3 nightmarish days.

The next time someone takes issue with America being equated with Nazi Germany, you can finally point to absolute, televised proof.

With Sarah Palin, Glenn Beck, and Rupert Murdoch, having already stacked disgrunted Tea-Partiers and FOX Watchers like so much dry kindling, the match that's struck to burn the first of a thousand Korans, may just set off a funeral pyre that will consume us all.

No matter who your imaginary friend in Heaven is.

Like all SHIFT HAPPENS pages over these last five years, this one is not about arguing if one COULD burn a book, or championing/reviling those who think books SHOULD be burned, but evidence that Science Fiction*, if read, can help us avoid such a conflict in the first place.

Certainly could have helped in Florida.

Perhaps, having read Fahrenheit 451, someone intent on burning the Qur'an might think twice when faced with the prospect of having to memorize every word of it in a future without books.

A world where every book was holy. Every word sacred.

Peace be upon Bernard Herrmann, and Stephen Hawking

*In the first book of Harry Turtledove's WORLDWAR, Sci-Fi gives us this description of a character's musings in an alternate World War II, after he's been chewed out by General George S. Patton; himself readying an attack on the Lizard forces attacking Chicago. Thinking that Patton probably hadn't asked for permission when he billeted troops with the citizens of Oxford Illinois.

"If Patton worried about that, he didn't let on. Maybe he had a point; the Founding Fathers hadn't anticipated an invasion from outer space."

The Founding Fathers hadn't anticipated an invasion from outer space.

On second thought, let's hope Sarah Palin or Glenn Beck don't read that. No disrespect, but I don't think either one could get through "IN THE BALANCE", much less the next two books.

Turtledove, however, made the effort to write it, perhaps in order to describe one of the heroes of WORLDWAR, the only one to take the invasion by the Race while we're fighting the Axis powers in stride, as an avid reader of ASTOUNDING magazine.

Here, in the 21st Century, with the Global War on Terror gone local and Magic bullet NEWS turning american against american (MISSION ACCOMPLISHED), neighbor against neighbor, Us against Them when only We are left, it is the bloggers and conspiracy theorists - some more astounding than others - already warning of, and preparing for, the next false flag operation.

They were the only ones to see through the last one.

Nothing like armed Raptors, dropping down from orbit, to give you the excuse you've been looking for to ignore the Constitution and the Founding Fathers instead of using both to get your way. NO MATTER WHAT.

Maybe Murdoch has already bought the rights. Someone will.

If WORLDWAR had been set during Vietnam or the Gulf Wars, Turtledove's character might have watched every episode of the Twilight Zone and been the only one to remark that McCarthy's ageless character in "Long Live Walter Jameson", was either born on September 11th, or that the Civil War picture used to bust him was taken on that very day.

Either way, we were next! 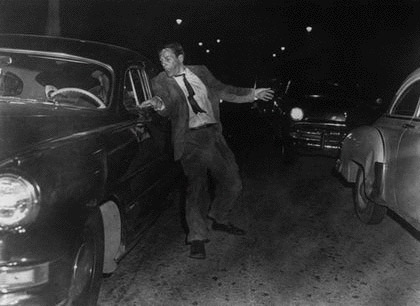 NO ONE WANTS TO HEAR THE TRUTH